Building Progress Bars for the Web with Django and Celery

The surprising complexity of making something that is, on its surface, ridiculously simple 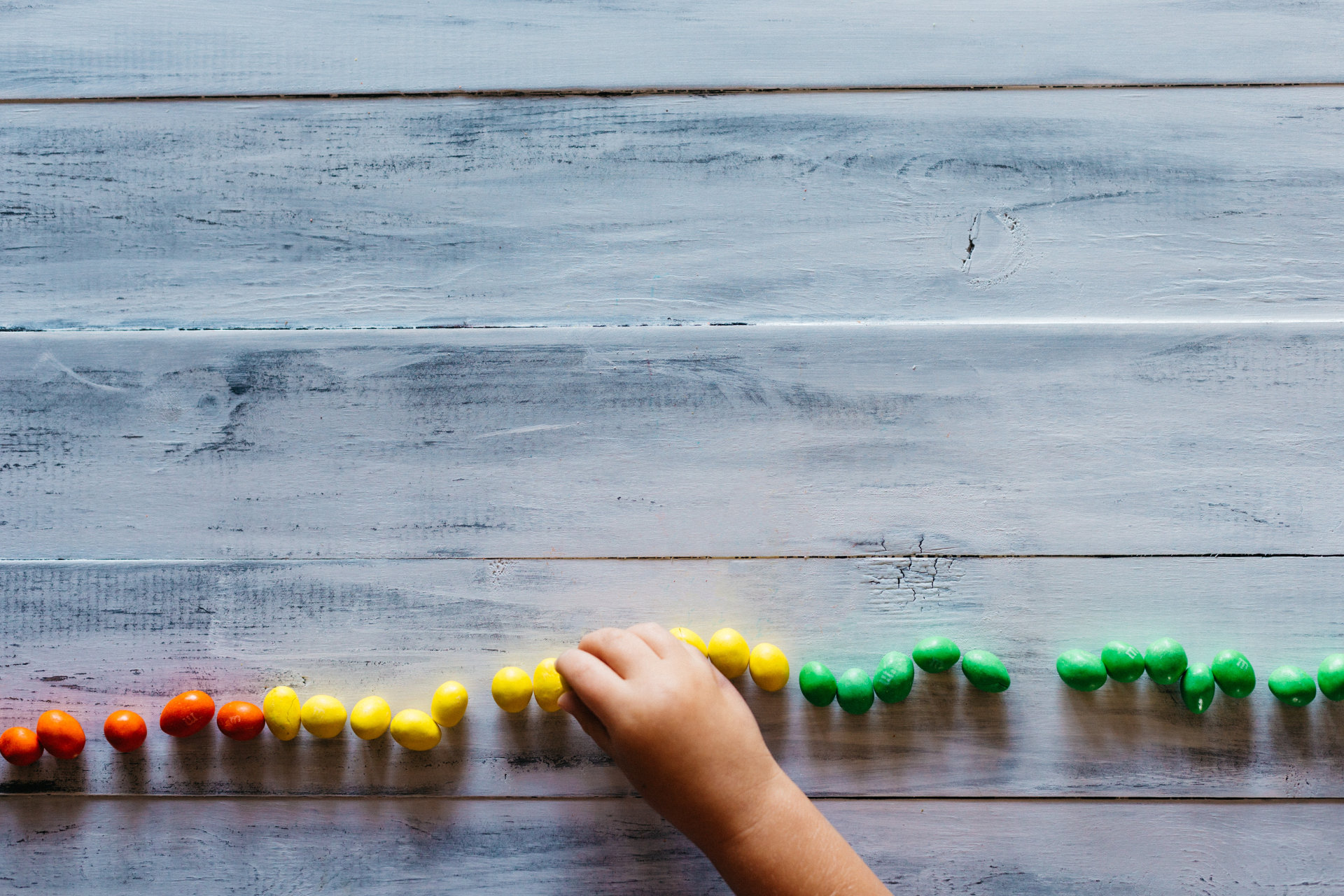 Photo by Patrick Fore on Unsplash

Progress bars are one of the most common, familiar UI components in our lives. We see them every time we download a file, install software, or attach something to an email. They live in our browsers, on our phones, and even on our TVs.

And yet—making a good progress bar is a surprisingly complex task!

In this post I'll describe all of the components of making a quality progress bar for the web, and hopefully by the end you'll have a good understanding of everything you'd need to build your own.

This post describes everything I had to learn (and some things I didn't!) to make celery-progress, a library that hopefully makes it easy to drop in dependency-free progress bars to your Django/Celery applications.

That said, most of the concepts in this post should translate across all languages/environments, so even if you don't use Python you probably can learn something new.

This might be obvious, but just to get it out of the way—why do we use progress bars?

The basic reason is to provide users feedback for something that takes longer than they are used to waiting. According to kissmetrics, 40% of people abandon a website that takes more than 3 seconds to load! And while you can use something like a spinner to help mitigate this wait, a tried and true way to communicate to your users while they're waiting for something to happen is to use a progress bar.

Generally progress bars are great whenever something takes longer than a few seconds and you can reasonably estimate its progress over time.

The Components of a Progress Bar

Alright, with that out of the way lets get into how to actually build these things!

It's just a little bar filling up across a screen. How complicated could it be?

The following components are typically a part of any progress bar implementation:

Immediately we can see one inherent source of complexity. We want to both do some work in the backend and show that work happening on the frontend. This immediately means we will be involving multiple processes that need to interact with each other asynchronously.

These communication channels are where much of the complexity lies. In a relatively standard Django project, the front-end browser might submit an AJAX HTTP request (JavaScript) to the backend web app (Django) which in turn might pass that request along to the task queue (Celery) via a message broker (RabbitMQ/Redis). Then the whole thing needs to happen in reverse to get information back to the front end! 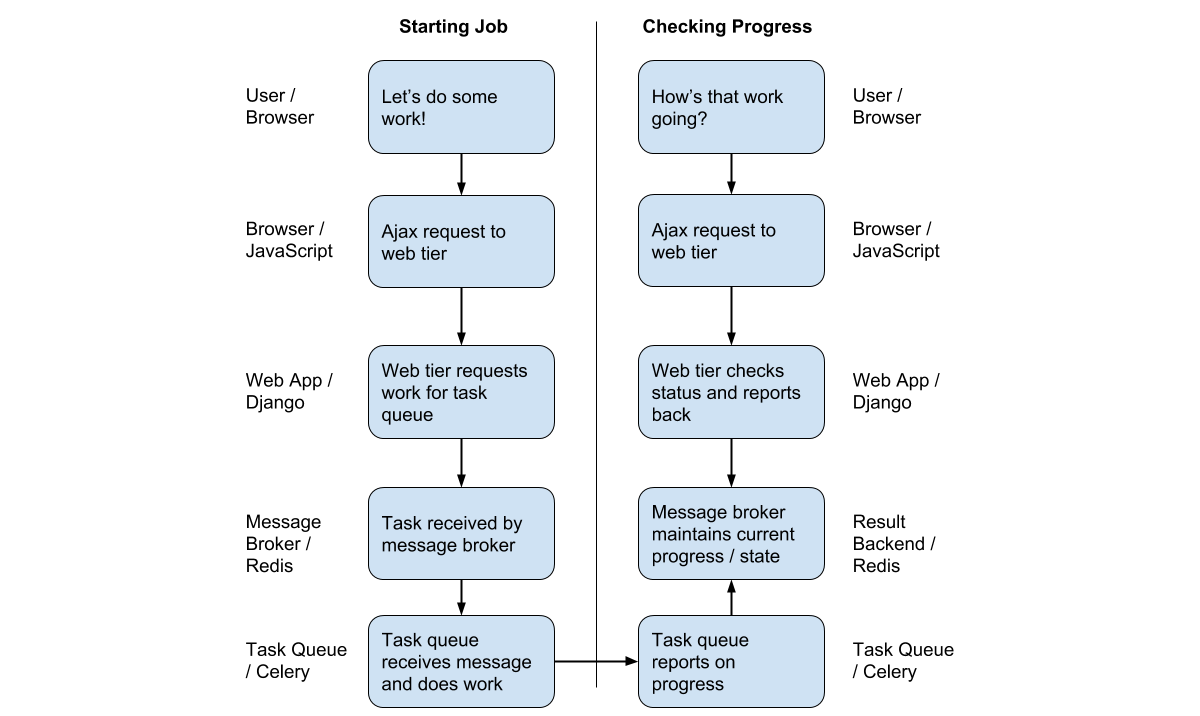 Let's dive into all of these components and see how they work in a practical example.

Looking for a complete code example? Check out SaaS Pegasus—a Django starter kit for your next big idea.

The front end is definitely the easiest part of the progress bar. With just a few small lines of HTML/CSS you can quickly make a decent looking horizontal bar using the background color and width attributes. Splash in a little JavaScript to update it and you're good to go!

The backend is equally simple. This is essentially just some code that's going to execute on your server to do the work you want to track. This would typically be written in whatever application stack you're using (in this case Python and Django). Here's an overly simplified version of what the backend might look like:

Well, we haven't actually said anything about how this work will get kicked off. So let's start there.

The Wrong Way: Doing it in the Web Application

In a typical ajax workflow this would work the following way:

In a Django view that would look something like this:

The wrong way: calling the function from the view

The problem here is that the do_work function might do a lot of work that takes a long time (if it didn't, it wouldn't make sense to add a progress bar for it).

Doing a lot of work in a view is generally considered a bad practice for several reasons, including:

For these reasons, and others, we need a better approach for this.

Most modern web frameworks have created asynchronous task queues to deal with this problem. In Python the most common one is Celery. In Rails there is Sidekiq (among others). The details between these vary, but the fundamental principles of them are the same. Basically, instead of doing work in an HTTP request that could take arbitrary long—and be triggered with arbitrary frequency—you stick that work in a queue and you have background processes—often referred to as workers—that pick the jobs up and execute them.

This asynchronous architecture has several benefits, including:

The Mechanics of How this Works

The basic mechanics of this are relatively simple, and involve three main components: the client(s), the worker(s), and the message broker.

The client is primarily responsible for the creation of new tasks. In our example, the client is the Django application, which creates tasks on user input via a web request.

The workers are the actual processes that do the work. These are our Celery workers. You can have an arbitrary number of workers running on arbitrary many machines, which allows for high availability and horizontal scaling of task processing.

The client and task queue talk to each other via a message broker, which is responsible for accepting tasks from the client(s) and delivering them to the worker(s). The most common message broker for Celery is RabbitMQ, although Redis is also a commonly used and feature complete message broker.

Basic workflow of passing messages to an asynchronous worker process

When building a standard celery application you will typically do development of the client and worker code, but the message broker will be a piece of infrastructure that you just have to stand up but beyond that can (mostly) ignore.

While this all sounds rather complicated, Celery does a good job making it quite easy for us via nice programming abstractions.

To convert our work-doing function to something that can be executed asynchronously, all we have to do is add a special decorator:

Annotating a work function to be called from Celery

Similarly, calling the function asynchronously from the Django client is similarly straightforward:

With just a few extra lines of code we've converted our work to an asynchronous architecture! As long as you've got your worker and broker processes configured and running this should just work.

Alrighty, so we've finally got our task running in the background. But now we want to track progress on it. So how does that work, exactly?

We'll again need to do a few things. First we'll need a way of tracking progress within the worker job. Then we'll need to communicate that progress all the way back to our front-end so we can update the progress bar on the page. Once again, this ends up being quite a bit more complicated than you might think!

Using an Observer Object to Track Progress in the Worker

Readers of the seminal Gang of Four's Design Patterns might be familiar with the observer pattern. The typical observer pattern includes a subject which tracks state, as well as one or more observers that do something in response to state. In our progress scenario, the subject is the worker process/function that is doing the work, and the observer is the thing that is going to track the progress.

There are many ways to link the subject and the observer, but the simplest is to just pass the observer in as an argument to the function doing the work.

Now all we have to do is pass in a valid progress_observer and voila, our progress will be tracked!

Getting Progress Back to the Client

You might be thinking "wait a minute… you just called a function called set_progress, you didn't actually do anything!"

True! So how does this actually work?

Remember—our goal is to get this progress information all the way up to the webpage so we can show our users what's going on. But the progress tracking is happening all the way in the worker process! We are now facing a similar problem we had with handing off the asynchronous task earlier.

Thankfully Celery also provides a mechanism for passing messages back to the client. This is done via a mechanism called result backends, and, like brokers, you have the option of several different backends. Both RabbitMQ and Redis can be used as brokers and result backends and are reasonable choices, though there is technically no coupling between the broker and the result backend.

Anyway, like brokers, the details typically don't come up unless you're doing something pretty advanced, but the point is that you stick the result from the task somewhere (with the task's unique ID), and then other processes can get information about tasks by ID by asking the backend for it.

In Celery this is abstracted quite well via the state associated with the task. The state allows us to set an overall status, as well as attach arbitrary metadata to the task. This is a perfect place to store our current and total progress.

Getting Progress Updates to the Front End

Now that we can get progress updates out of the workers / tasks and into any other client, the final step is to just get that information to the front end and display it to the user.

If you want to get fancy you can use something like websockets to do this in real time, but the simplest version is to just poll a URL every so often to check on progress. We can just serve the progress information up as JSON via a Django view and process and render it client-side.

Javascript code to poll for progress and update the UI

Putting it All Together

This has been quite a lot of detail on what is—on its face—a very simple and everyday part of our lives with computers! I hope you've learned something.

If you need a simple way to make progress bars for you django/celery applications you can check out celery-progress—a library I wrote to help make all of this a bit easier. There is also a demo of it in action. And a complete working example can also be found in SaaS Pegasus—a Django starter kit for your next big project.

Questions? Comments? Drop me a line and I'll be happy to respond.

Level Up your Django Game

Follow this page to get updates, content and other goodies about building SaaS applications with Django. No spam. Unsubscribe anytime.